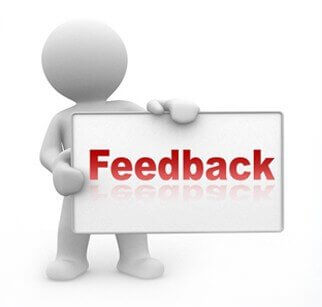 Giving feedback is an honest two way dialogue with another person without any intent to show them down or in poor light.?Feedback?is not a bashing exercise!

Feedback helps people maximize their potential at different stages of life or career, it raise their awareness of strengths and areas for improvement, and helps them to identify actions to be taken for improving performance.

When to Give Feedback

Whether you?re an?employee, manager, or entrepreneur, the people you work with will make mistakes at some point?and you?ll have to address them , Feedback is one of the best tools to use.

When you recognize an issue or problem, giving feedback is the clearest, quickest way to encourage a change in behavior. It can help a co-worker focus on the key areas he or she needs to work on. Plus, many people are motivated or inspired by well-delivered feedback, and will perform at a higher level because of it.

Your feedback doesn?t have to be limited to the people who report to you, either. It?s possible to give constructive suggestions to co-workers and even superiors, as long as you position it in a helpful, insightful way.

How to Give Feedback

You would be surprised how much of a difference this makes. A simple ?Hey, do you have a minute for some quick feedback?? can help the receiver be mentally ready for it, be it positive or negative.

2. State What You Observed

Where possible, use specific examples and avoid being judgmental. ?You don?t give off a lot of energy in meetings? is not as helpful as, ?In the meeting with Tina yesterday, I noticed your body language was rather passive.?

Point out the direct impact that resulted from this behavior, and again be as specific as possible. Saying, ?When you called the meeting to an end without leaving time for discussion, it made me feel like you did not value the team?s input? or ?I noticed that the clients were upset? is much more effective than ?When you don?t leave time for a discussion, you look like a control freak.?

Statements like ?it made me feel? and ?I noticed that? are more difficult to argue with, and using those phrases will keep the feedback session from devolving into a debate.

When you?ve said your piece, stop. And then ask for the other person?s reaction. Give them time to think through what you?ve said and react to it.

Give a small number of actionable suggestions (ideally only one or two) that the other person can take in the future, to change this behavior. They will appreciate that you?re giving them the first step to improving the situation.

Try it yourself! Practice giving feedback with a partner, or record yourself and listen to the play-back. And make sure you?re avoiding these common errors that can turn feedback into fights:

Choose one issue at a time! Focusing on too many skills or behaviors at once is confusing and overwhelming, and can feel like an all-out attack.

Don?t be too critical or focus too heavily on the negative. Feedback should inspire the other person to improve, not make them wallow in where they went wrong. Giving a piece of good feedback with negative feedback makes it easier to swallow.

But don?t avoid real problems, either. If there?s an issue, don?t be afraid to state it.?Avoid vagueness. Use specific examples, and connect those behaviors to the impact they have. Leave plenty of time for the recipient of your feedback to ask or answer questions and respond to what you?ve said.

Part of this article is written by?Kathryn Minshew and is posted on dailymuse.?Kathryn is The Daily Muse?s number one swashbuckler. Prior to founding the company, Kathryn worked on vaccine introduction in Rwanda and Malawi with the Clinton Health Access Initiative and previously worked as a management consultant at McKinsey & Company. She?s appeared on CNN, Fast Company, PBS, Forbes? 30-Under-30 in Media and INC?s 15 Women to Watch in Tech. When not at work, Kathryn is an avid globe-trotter and an adventurous cook. Say hi on Twitter @KMin.

How To Give Negative Feedback To a Colleague Who’s Older Than You?