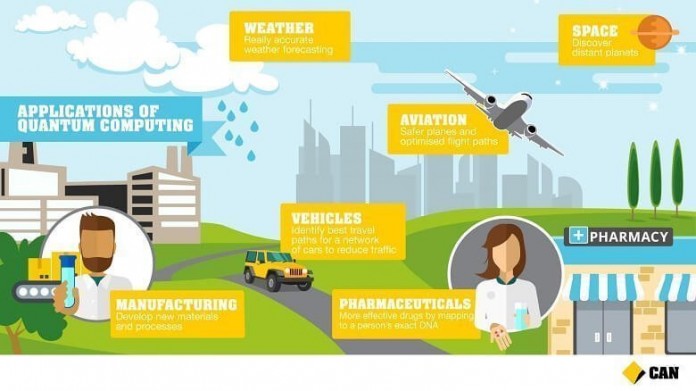 The history is all set to repeat itself; the fourth Industrial Revolution would give birth to new technologies, sectors, and organizations. It is said that the fourth Industrial Revolution will ride on the integration of Artificial Intelligence and Robotics, the present day computing technology is highly inadequate to handle this leap; Quantum Computing is one of such technologies that will rewrite the future of humanity and will be the hottest sector for job professionals.

What is Quantum Computing?

In a classical computing, which is the one used today, the basic unit of information is a bit, which can have only one of two values, which is either zero or one. In quantum computing, quantum bit or ?qubit? is the basic unit of information. Through the interplay of quantum mechanical phenomena, these qubits can perform many computations concurrently, which supposedly allows the quantum computer to solve a difficult subset of problems much faster than a classical computer.

Let’s look at real statistics; if you were to sort a billion numbers on a quantum computer, it would need only 31,623 steps, less than one-hundredth of 3.5 million steps that a binary-based computer would need.

What Is Quantum Computing Best Suited For?

As quantum computing is in nascent stages and its uses are still being discovered, it is believed that it is well built to solve problems using optimization, sampling, and machine learning algorithms. Almost every business that operates globally can benefit from getting to know about the most optimum choice from a sea of options or probabilities. Some of the most common examples of optimization problems include finding the most cost-effective route for transporting goods or determining the most efficient way to extract resources from a mine.

Sectors, Where You Can Build Your Quantum Career

The first adaptors of this upcoming technology are stated to be in the pharmaceutical industries and chemical industries, where scientists can decrease the time to discover new materials. As quantum gains more computing power with the addition of more qubits, its usage is expected to grow into the finance and machine learning spaces. Here the sectors where there will be hot demand for quantum professionals soon.

Quantum computing would transform the banking industry, as it will be able to analyze thousands of assets with interconnecting dependencies and determine the best investment option. Additionally, quantum-computing techniques will be helpful in efficiently mapping key fraud indicators early on.

With Quantum Computing, clinical trials can be simplified and moved online, where simulations can be run for different drug compositions on human DNA. This would reduce the time to market for drugs and completely reinvent medical drug discovery process.

There is a vast scope to optimize the procurement, production, and distribution channels in the supply chain environment. As quantum computing evolves, it will leap from solving one-time scenarios like planograms or truckloads to simulating and selecting the best option for large system-wide scenarios like store floor and regional or global distributions.

Ad engines work by collect hundreds of attributes about a consumer?s preferences, which is then mapped to product affinities and represented as a graph, the final decision on which ad to show a customer is a result of optimizing this graph. Quantum computer is best suited to make a choice.

5. Cryptography has always been based on mathematical assumptions; however quantum cryptography is based on the law of physics. The current encryption techniques are good enough until the time quantum does not step in to challenge the limits of these algorithms.

How can you learn Quantum Programming?

While the scientists are busy developing the upgraded universal quantum computers and improving the qubits, you should take advantage of this opportunity and learn quantum programming early on. Much sooner than you anticipate high end and sophisticated computing will migrate to quantum computing. Here some other useful resources to polish your hand.